A Demonstration of Astronomy on the Cheap!

I don't yet have a fancy telescope that can track stars and take long exposures of them. But the moon is a different story! 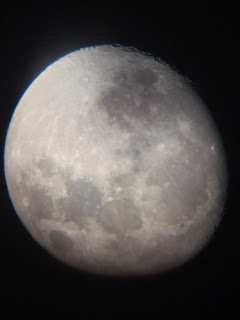 That photo was taken from my hometown, in the midst of real light pollution, and with a street light across the road. As for the technical details:

I plan eventually to get a decent refractor scope with tracking capability to minimize the "smearing" of images caused, of course, by the earth's rotation during time-lapse pictures. 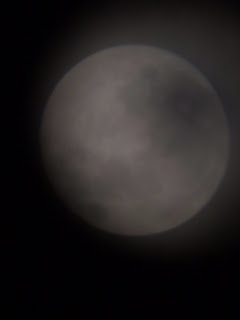 I took this one last night when I set up my gear preparing for the eclipse this morning. You can see some clouds swirling around the moon... and it got MUCH worse. This morning, during the eclipse, our valley was totally covered with clouds. 😒
Posted by TruckerRon at 9:28 PM No comments:

How Do You Measure a Planet’s Temperature?

Why I Think Global Warming Is a Fraud: How Do You Measure a Planet’s Temperature?

When astronomers measure the temperature of a planet, they have both an advantage and a disadvantage over meteorologists here on Earth. Their instruments can acquire data from nearly 50% of a planet’s surface at a time… but they cannot measure that temperature as accurately as someone on that surface might be able to at a specific location. In other words, astronomers can only measure the average temperature of the portion of the planet that their instruments can "see." And until satellites were first used in 1979 meteorologists here on Earth had to measure the temperature at multiple points and mathematically average them.

How Accurate Was the Global Record Before Satellites?

The first continual instrumental record of temperature in the world is the Central England Temperature record, started in 1659. During the mid-19th century the measuring and recording of temperatures spread to other locations, but not until 1873 with the foundation of the International Meteorological Organization that people began to try and take the temperature in the same way.

But note that these temperature readings were limited mostly to urban locations in Europe and North America until after World War II. And that they were not monitored for changes to the environment of the thermometers, such as the introduction of asphalt roadways and parking lots. Or the introduction of new heat sources, like nearby mechanical equipment.

At no point was there any real attempt to set up a regular network of automated thermometers at set distances apart over the entire planet. The expense would have been immense and the technical difficulties, such as placing devices in high mountainous areas or positioning them on the open seas, insurmountable.

Other Attempts to Establish a Global Record

Lacking direct measurements hasn’t been a barrier to some. They have chosen to infer temperatures through such means as ice cores from Antarctica or variations in the thickness of tree rings. Yet how accurate can those be? What assumptions are they making?

That raises yet another question for me: measurement error. In my college physics classes we were cautioned about relying too much on apparently precise measurements. To quote Wikipedia:

Observational error (or measurement error) is the difference between a measured value of a quantity and its true value. In statistics, an error is not a "mistake." Variability is an inherent part of the results of measurements and of the measurement process.

A simpler way to put it is that we cannot be certain that any measurement is as accurate as multiple digits after a decimal point imply. Before digital calculators became common and affordable, most calculations were performed with slide rules. We assumed that there were perhaps 3 significant digits in each calculation we made, and only 3 or 4 in the final result. Now we can quickly add together hundreds of values from thermometers and find their average, with results like 72.36426229… But the fact is that those initial values were probably recorded as whole numbers and that final calculation should be rounded to 72. Reporting those extra digits give a false impression of accuracy that’s not supported by the instruments used.

Confirmation bias also plays a role in this situation where we emotional, semi-rational humans unconsciously look for reasons to put more emphasis on data that support our beliefs and, of course, to reject data that conflict with them.

I believe that many who are accepting the global warming hoax are often ignorant of how the data is being collected and reported by researchers. I think those who know better are guilty of knowingly violating the rules and standards of data collection in order to gain power or financial rewards.

Simply put: The truth is not in them.
Posted by TruckerRon at 9:10 AM 4 comments:

Before Buying a Telescope

Before Buying a Telescope

I’m certain that the total solar eclipse of 2017 will have tempted many in the US to have invested in telescopes. That’s wonderful for two reasons:


Now, forgive me for the negativity expressed in that second reason, but during the past year I’ve discovered that too many of us who impulsively bought telescopes have learned some hard lessons… and I wish I could have read the advice I’m about to give here before I invested in my telescope.

How often will you be able to use a telescope?

We often joke about the many treadmills and exercise bikes being used as clothing racks. Too many telescopes are doomed to join them. Why? Because of the weather!

Before investing in a telescope you need to come to grips with your local night sky. Telescopes can be fitted with special filters to block out much of urban light pollution, but nothing enables them to show you the night sky if it’s cloudy. I recommend that you first pay attention to how often your sky is relatively clear at night, especially during the hours that you’d want to be viewing the heavens. You might even start a calendar of clear nights that you’re having either where you live or where you might expect to drive to.

What do you expect to see with a telescope?

The first thing you need to know is that it’s not the telescope that determines what you’ll see in the night sky, it’s your eyes. Human eyes work best with strong lighting; we can see more colors and for farther distances during a bright, sunny day than we can on a cloudy day or at night.

This means our eyes simply cannot see the colors through a telescope that pictures in magazines show us. Those are time-lapsed photos, taken with long exposure times with telescopes that track their targets across the sky. Those images are then manipulated with special software to bring out the colors that you’d see if you were much, much closer to those objects. Often special filters are also used to bring out particular colors produced by gases in the nebulae or other objects.

For example, here’s the Orion Nebula as seen with your eye through a telescope: 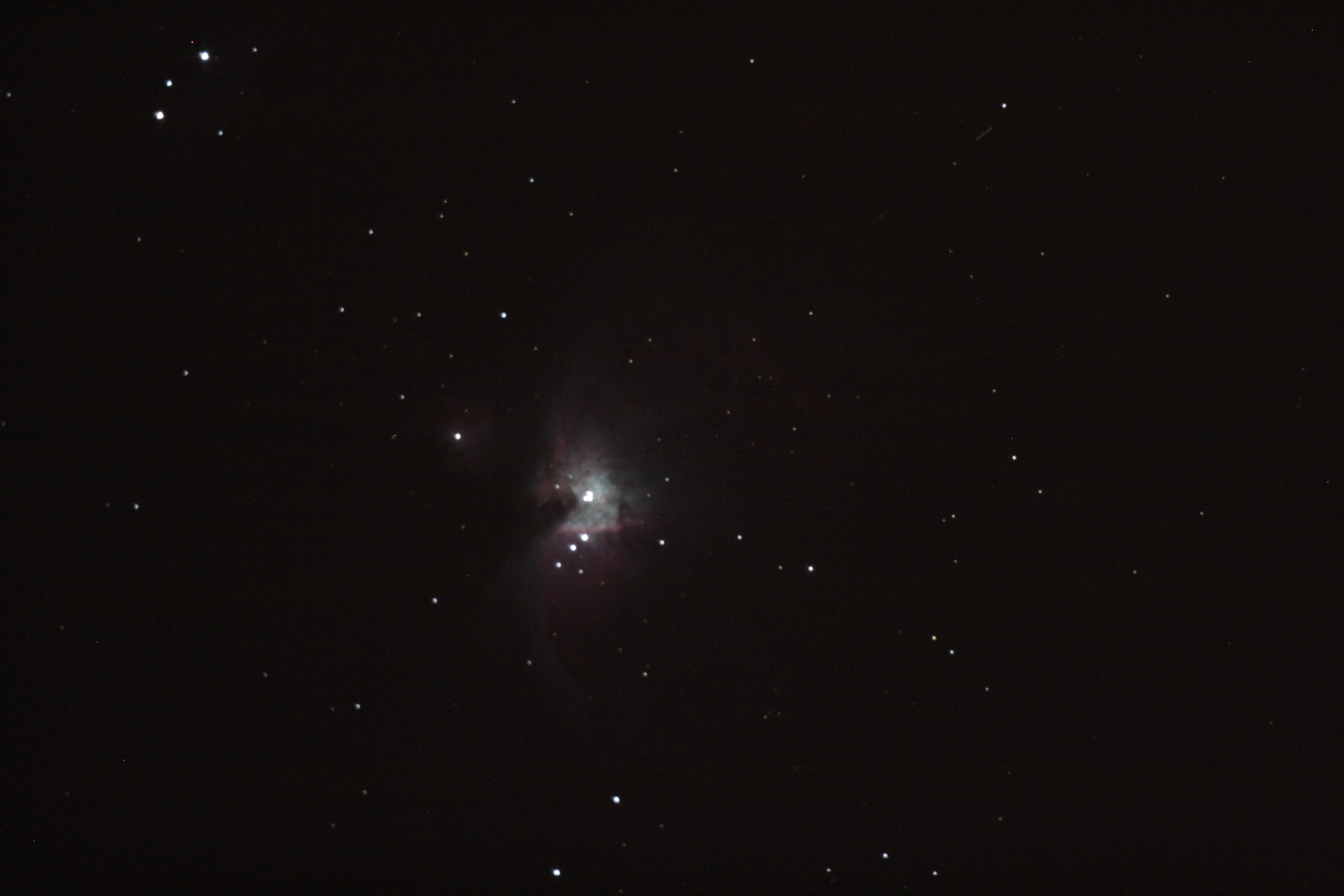 And here’s the same nebula as shot by an amateur with astrophotographic equipment and manipulated with software to provide color:

Beautiful, high quality images can be obtained with amateur-level equipment, but it will take both money and effort to get there.


What’s the best way to start out?

Binoculars, when used with a good tripod, are an inexpensive way of getting into astronomy. Good quality binoculars cost far less than a good quality telescope—all you need to add is a tripod (and an adapter) to stabilize the binoculars.

Do look for a pair with 10x to 20x magnification and have apertures of at least 50 mm (that would be written for example as 10x50). Some advantages to starting with binoculars:

So, which telescope should you buy?

Beginning astronomers often start out wanting just to see what’s up there. Eventually, though, they start wanting to share what they’re seeing by videoing or taking pictures. Both are fun, but the equipment required for each task differs in some important respects—there’s no such thing as the “perfect telescope” that can do everything very well.

Warning: Be prepared to ignore ads hyping 600-power telescopes (or even higher!). Why? Because from the surface of the earth you can’t use super-high-power telescopes and see anything worth seeing!

1.      Stars twinkle. Through our atmosphere, stars do seem to twinkle, to move about slightly, because our air is often turbulent. That’s why the most powerful telescopes are built for observatories on mountains like Mauna Kea in Hawaii, at 4,205 meters (13,796 feet). And those telescopes use advanced technologies with lasers and computer-controlled mosaic mirrors to minimize the effect of turbulence in the atmosphere above that altitude!

2.      Objects in the sky move, right? Well, you were told in school they appear to move because this old Earth is spinning—and that is true. So, when you magnify the image that apparent movement is also magnified and you end up having to keep the telescope moving to allow for it. In other words, if it takes 100 seconds for the moon to drift out of view at 20x magnification, it would drift out of view in just 20 seconds at 100x magnification.

3.      Much of what you’ll want to see doesn’t require much magnification anyway. For example, the Andromeda Galaxy stretches almost 6 times the width of the full moon (178 arc-minutes vs 30 arc-minutes).

Frankly, any resolving power over 300x will be wasted except on the clearest nights with extremely calm air.

With a telescope, what really matters is the amount of light that reaches your eye or camera. That’s the secret to seeing things many, many light years away. There are two ways to get more light to the eyepiece:

2.      Time—focusing on an image over time allows more light to strike the photoreceptors in a camera. In the olden days astronomers used photographic plates or film to produce their images. Today cameras take multiple images of a few seconds each and then use software to “stack” them.

Basically there are two kinds of optical telescopes:


Both refractors and reflectors have their strong points and are worthy of consideration.

What do you want to do with a telescope?

Answering this question will help you decide whether you want to spend a lot of dollars on a computerized telescope that does much of the work for you or just start with a small telescope and explore the night sky on your own, perhaps aided by a good book that will help you learn the stars and constellations. Some telescopes are better for astrophotography, others for just plain seeing what’s up there. You may even want to buy separate telescopes for specific purposes.

I strongly recommend that you visit friends who have telescopes or attend a few public “star party” hosted by local astronomy clubs. Look through their telescopes and pester them with questions until you’re comfortable that you can decide which sort of telescope you’ll want.

Whatever route you choose, welcome to the universe!

Posted by TruckerRon at 3:52 PM No comments: